In March of 2017, soon after opening Humanity Home, I learned that the woman I had been educating for five years to eventually direct Humanity Home was 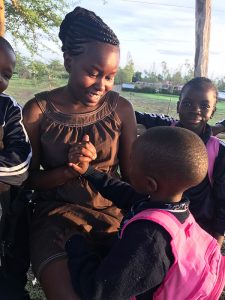 dishonest. Desperate to find a new director, I recalled a young female teacher that I had met three years earlier when she accompanied some students who were playing baseball with us. I had obtained her email address and, miraculously, was able to find it. Sensing that this young woman was of solid character and judgment, but thinking she was still teaching, I emailed her out of the blue, asking if she knew anyone who might be interested in this daunting position.

To my amazement, Judy responded that she would be very interested. Her former students spoke highly of her. I knew she was smart and organized because of her chemistry background. All Judy knew was she was being thrust into a new children’s home with 13 kids and a toxic environment created by her predecessor. She accepted the position and moved in at Humanity Home.

For the first four months, Judy overcame one crisis after another. In July, she celebrated her thirtieth birthday. In August, 2017, I spent two weeks at Humanity Home, which gave us a chance to further develop a working relationship. I was immediately impressed by the non-institutional, family atmosphere that was already forming. We spoke a lot about our mission and our approach, which is simply stated: We will raise these children as our own. That means every time we see each child, that child is the most beautiful thing we have ever seen in our lives. Everything else follows from that.

Judy has taken this basic approach as a spark and ignited a roaring fire that warms everyone at Humanity Home. She brings not only her sharp mind and endless energy, but more importantly her heart and soul into being the mother of our twenty children. She adores the children, and they adore her. They call her “Mommy.” She fiercely advocates for and defends our children in the face of backward and repressive school and cultural practices. A head teacher criticized her for feeding these “African children” too well by giving them protein for breakfast and for talking to the children about what happened in school. Big mistake! She is passionate and articulate, and reluctant head teachers and bureaucrats are no match for her. She has a mother’s fight and a mother’s pride.

Judy has dealt with the work, challenges, child psychology and countless surprises that come with parenting twenty children with poise, determination and a sense of humor. Countless times she has told me how much she loves her position. She delights in the joy that the children bring, and marvels at what she calls the miracles that have completely transformed the children of Humanity Home. In reality, the miracle is simply the love that Humanity Home provides, and the tone is set by Judy.

Judy will often ask me for advice or suggestions. When given a suggestion, she will expand upon and apply the concept ten-fold. She is on a wavelength that makes dealing with the issues that come up with the kids productive and fun.

In April of 2018, I spent three weeks at Humanity Home. The love there, the way the children literally glow, is astounding. On Sunday mornings, everyone gathers on the large couches in the main room. Judy sings hymns with the children and discusses humanistic principles of how we should live our lives. Every time Judy comes or goes from the house, she is smothered by twenty hugs. The kids know they can come to her with any problem, at any time, for encouragement, love and counsel. They have ownership. They look out for their brothers and sisters. This is truly a family.

Other children’s home directors talk about how they can’t wait for school breaks so they can send the kids “home” for a few weeks and get a break. Judy hates it when the kids go “home” because she worries about their well-being and she just misses them, and because Humanity Home is their home. Other directors have asked her, “How can you bond with kids who are not your own?” Judy’s response is “How could you not?”

As much as Judy marvels at the transformation of our kids, so I marvel at the growth Judy has shown in the past year. Judy is the seventh of seven children. She had two educated, wonderful parents. Her father passed away when she was just 13. He prized his little girl. Her mother, whom I have had the pleasure of meeting, knows every good Mom trick that there is. Her older siblings are very supportive and she has been around a host of nephews and nieces. She came by her parenting skills honestly. Empowered to use her instincts, she has blossomed.

Of course, when I hired Judy, under the circumstances described above, to guide Humanity Home, there was no way of knowing what we were getting. She is an absolute Godsend to Humanity Home. This April, Judy told me that before I contacted her, she was looking for meaning in her life, for a way to make the world a better place, and that she hated jobs that were routine. Three weeks before I called, her niece talked with her about a premonition that Judy would work in a children’s home.

Perhaps the reader can figure out how all this happened. I cannot. I just know there are twenty beautiful kids in Kenya whose lives are infinitely better and will be changed forever by this remarkable lady.