Life at Humanity Home from November 2, 2019 to January 26, 2020 was filled with experiences that demonstrated over and over again who we are and confirmed the transformation of our wonderful children.  Let me share a sampling of the memories that come rushing in as I struggle to convey what HH has become beyond my wildest dreams.

Humanity Home is a family.  The kids love each other and look after each other.  There is remarkably little conflict.  Every kid in the house is drastically different than when he or she arrived.  They are confident, healthy and happy and their personalities are blossoming before our eyes.

Family rituals have evolved, like Sunday in-house services at which the older eight kids beautifully sing many hymns due to Judy’s expert and passionate coaching.  Sunday service usually includes a talk by Judy, about things like doing our best, being who we are, setting our own standard, loving each other, and using the gifts and talents we have to make the world a better place.  We not only have a wonderful group of older girls, but the younger kids emulate the kindness and responsibility that they see in their older sisters.

Another ritual is walking to the river Nyando, about a mile away, to throw stones and then take a detour for sodas and biscuits on the way home.  On the way there and back, the kids frequently have their arms around others or walk arm-in-arm.  On a typical river walk, virtually every kid interacts directly with every other kid.  When we crowd into the tiny outdoor kiosk for sodas, the kids’ behavior is orderly.  I am proud of them every time. 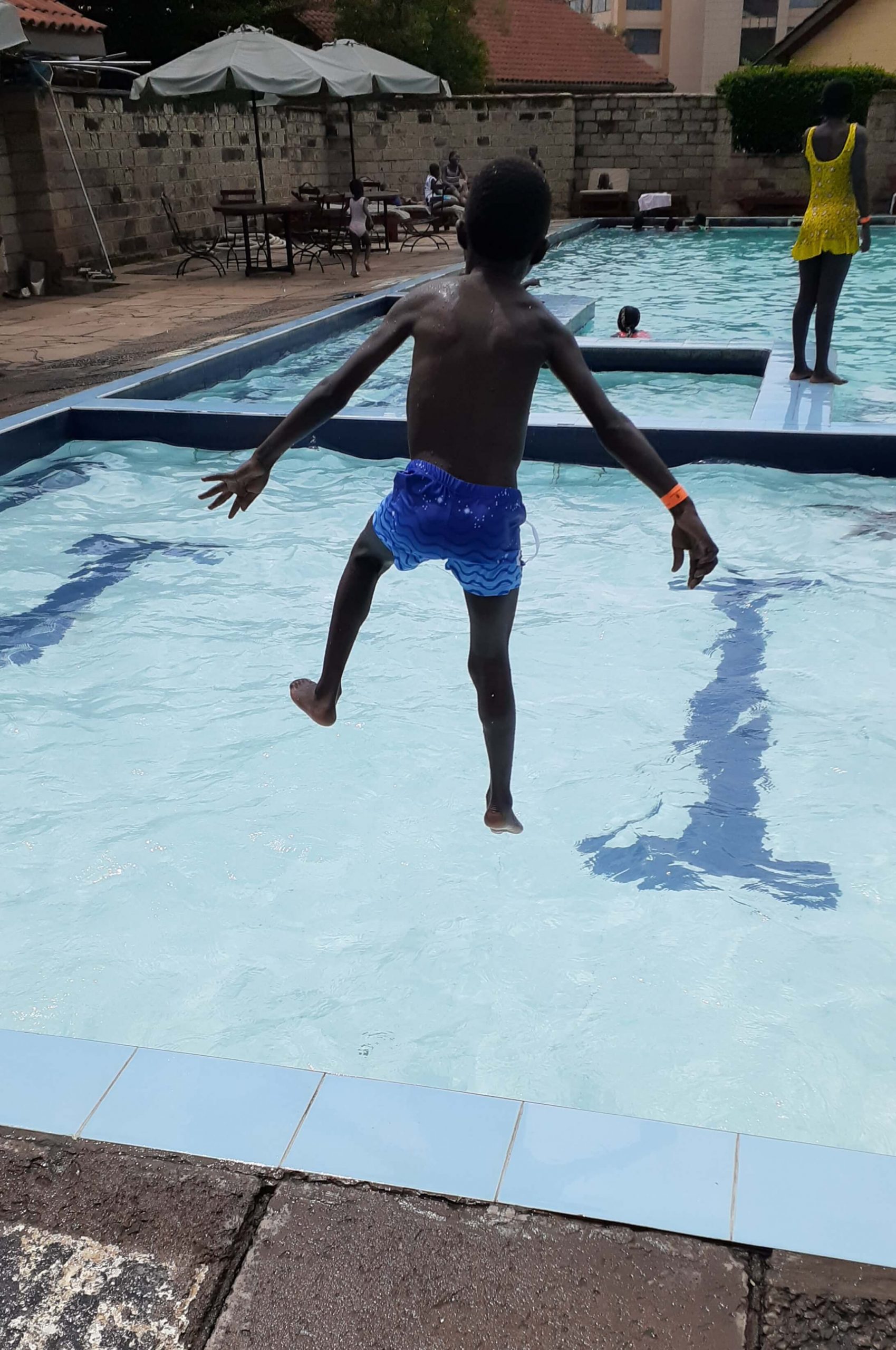 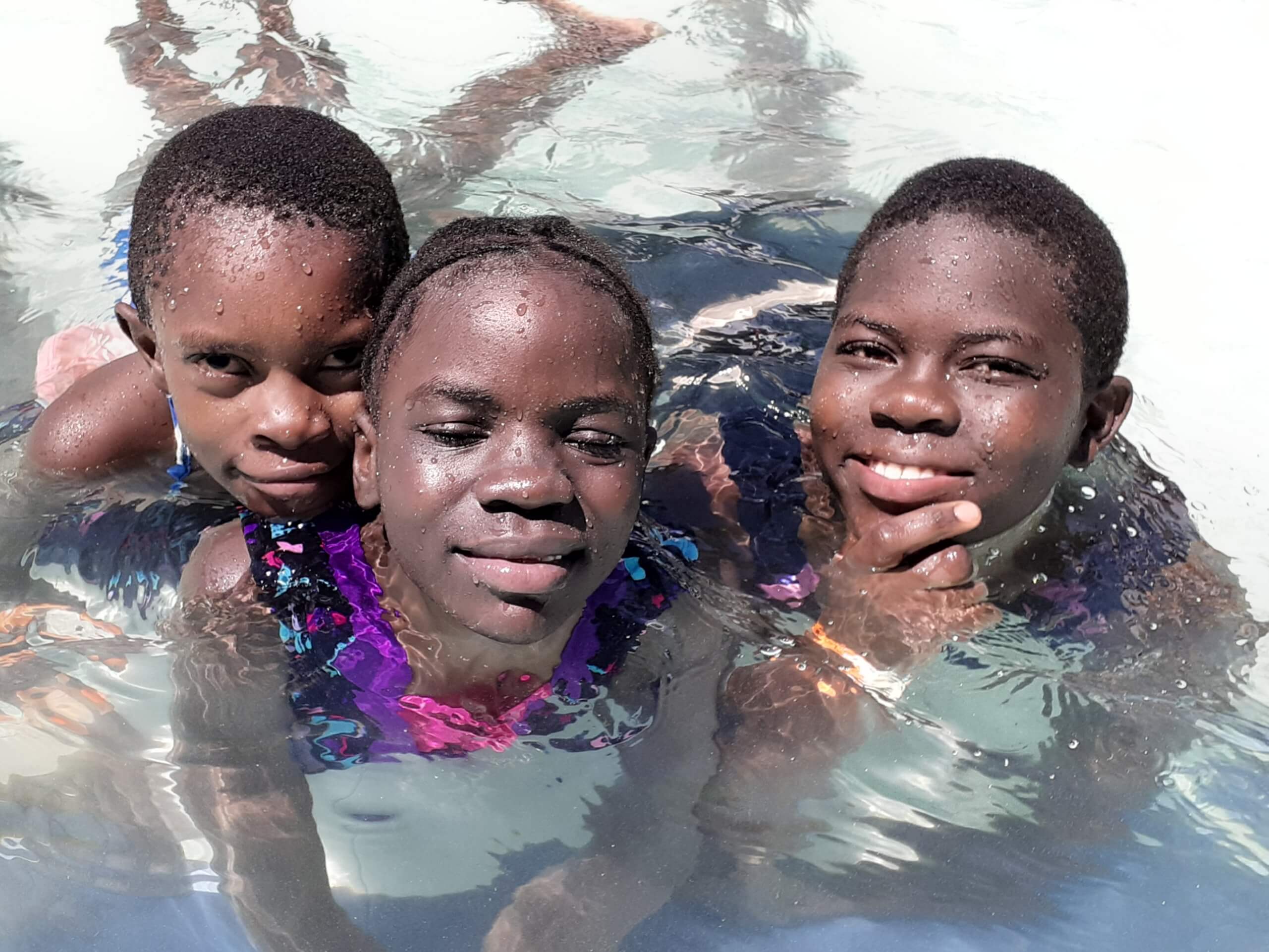 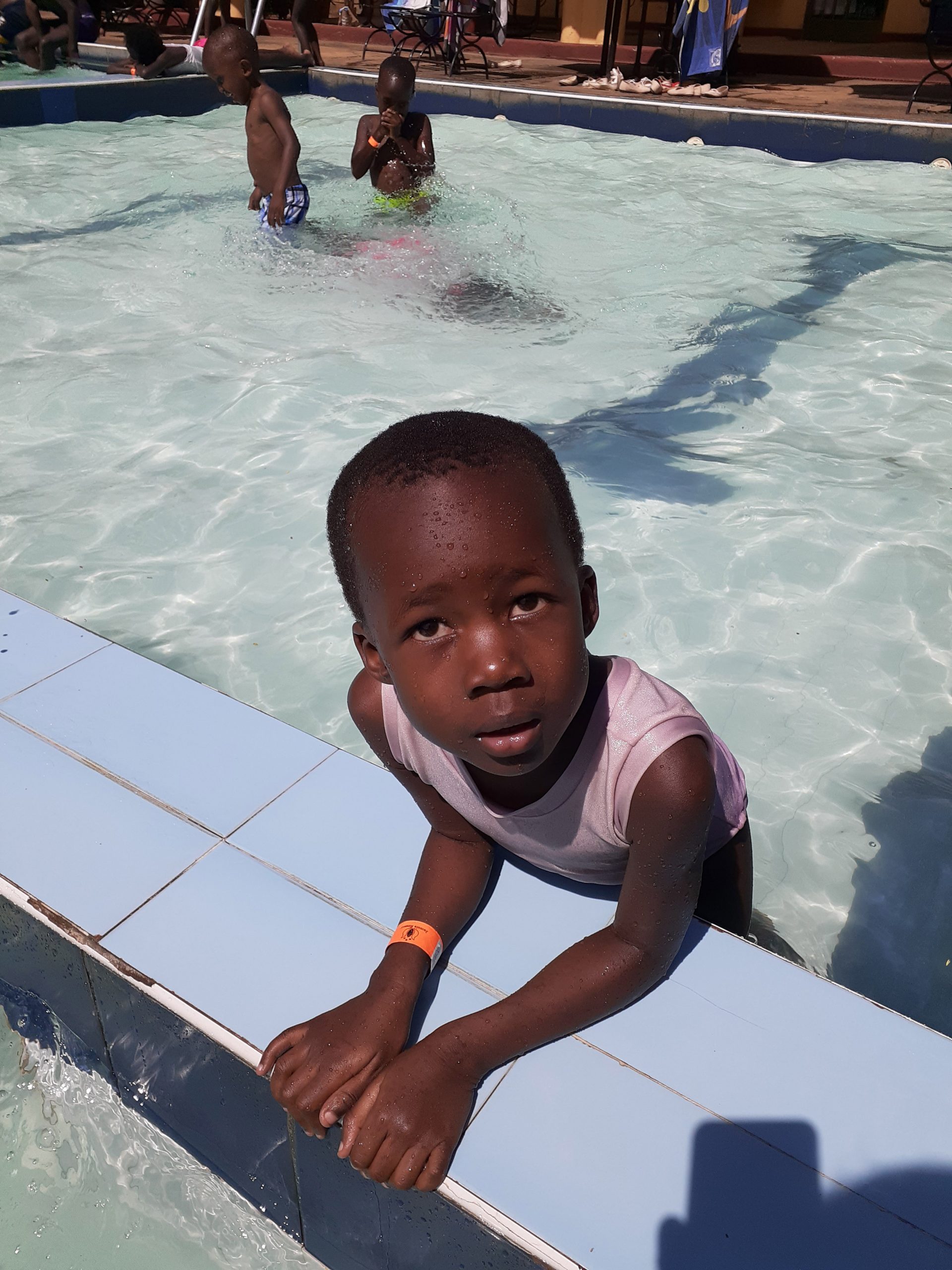 Going swimming at a hotel pool in Kisumu is another HH favorite.  Twenty-some of us pack into a fourteen-passenger van for the forty-five minute ride to the pool.  Each of the older kids has a little one in her lap.  (For an old personal injury lawyer, this is cringe-worthy but the best we can do).  I have never heard one kid fuss or complain about the cramped conditions.  We spend about four hours at the pool, and the kids are active most of that time.  Thanks to a resident swimming instructor and the fearlessness of the kids, their swimming skills are really coming along.  And my goodness do they have fun!  For lunch, we order the least expensive things on the menu and divide them up.  Again, I have never heard any fussing whatsoever.  Ten minutes into the ride home, everybody is asleep. 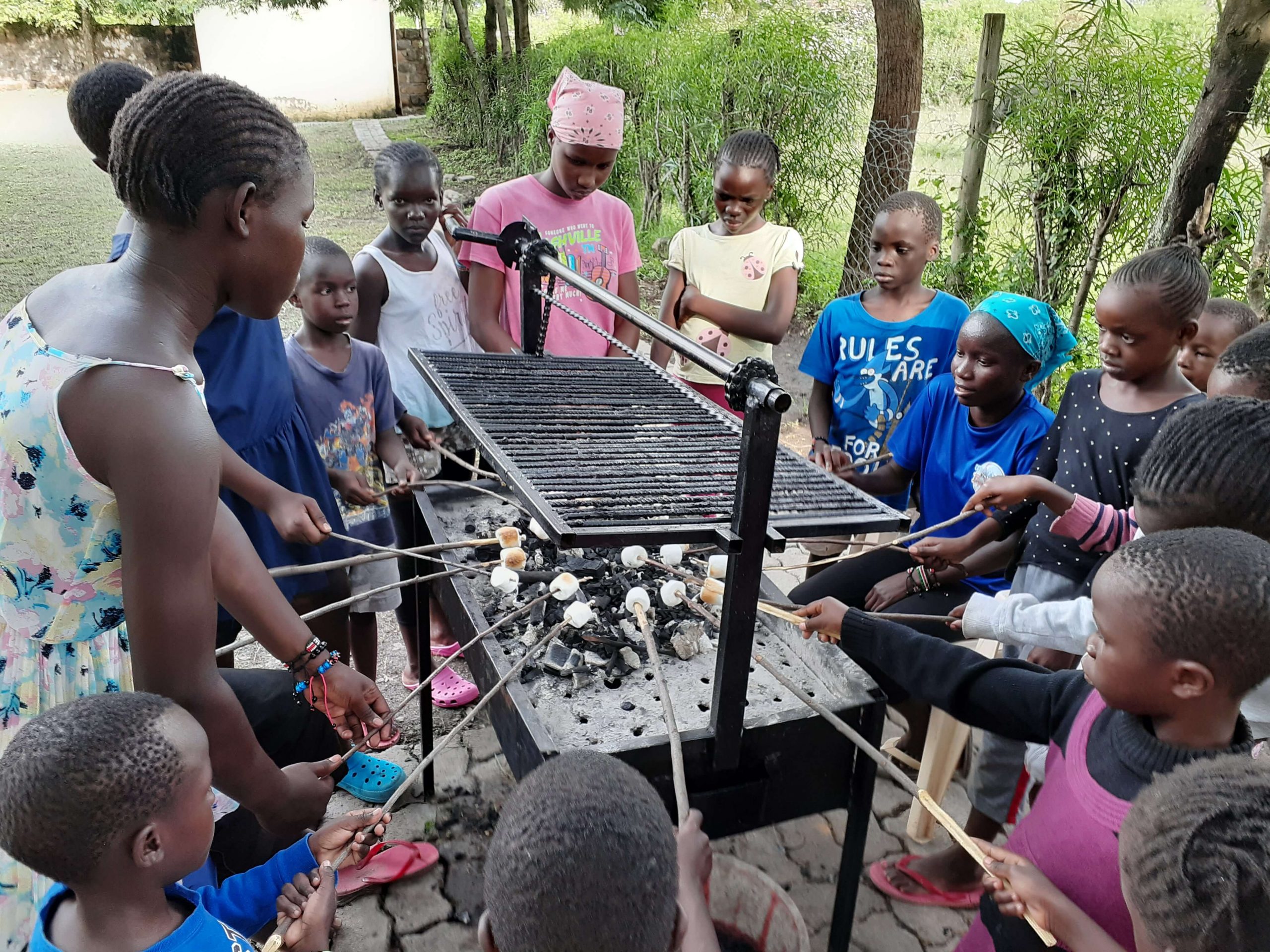 And then there is barbecued chicken!  The boys help cut up the chickens and make the barbecue sauce, and fan the charcoal fire.  Several of the girls like to hang out and assist with the actual cooking.  This is lovely family time at the end of the day.  The kids absolutely love this meal.

Meals are often fun.  First, it is still an incredible feeling seeing kids enjoy a nutritious and ample meal, knowing such a thing would be unknown to them without HH.  Often, the little ones will finish their meal while the adults are eating and then position themselves watching us by peeking over the back of the couch.  Those adoring little faces are beyond priceless.

Countless times there is just cuteness, like the time one of the little girls was pretending to call us on a cell phone using her foot as the phone.  Pretty soon everyone was trying it.  I had to put my foot on speaker.

No day at HH is complete without story time before bed.  We have accumulated about fifty books and we must have read each of them an average of twenty times.  We usually end with “Goodnight Moon” which the kids recite by heart.  We always conclude by singing “You Are My Sunshine.”  Then each kid gets a big hug from each adult.  Some of the kids like a kiss on the cheek. 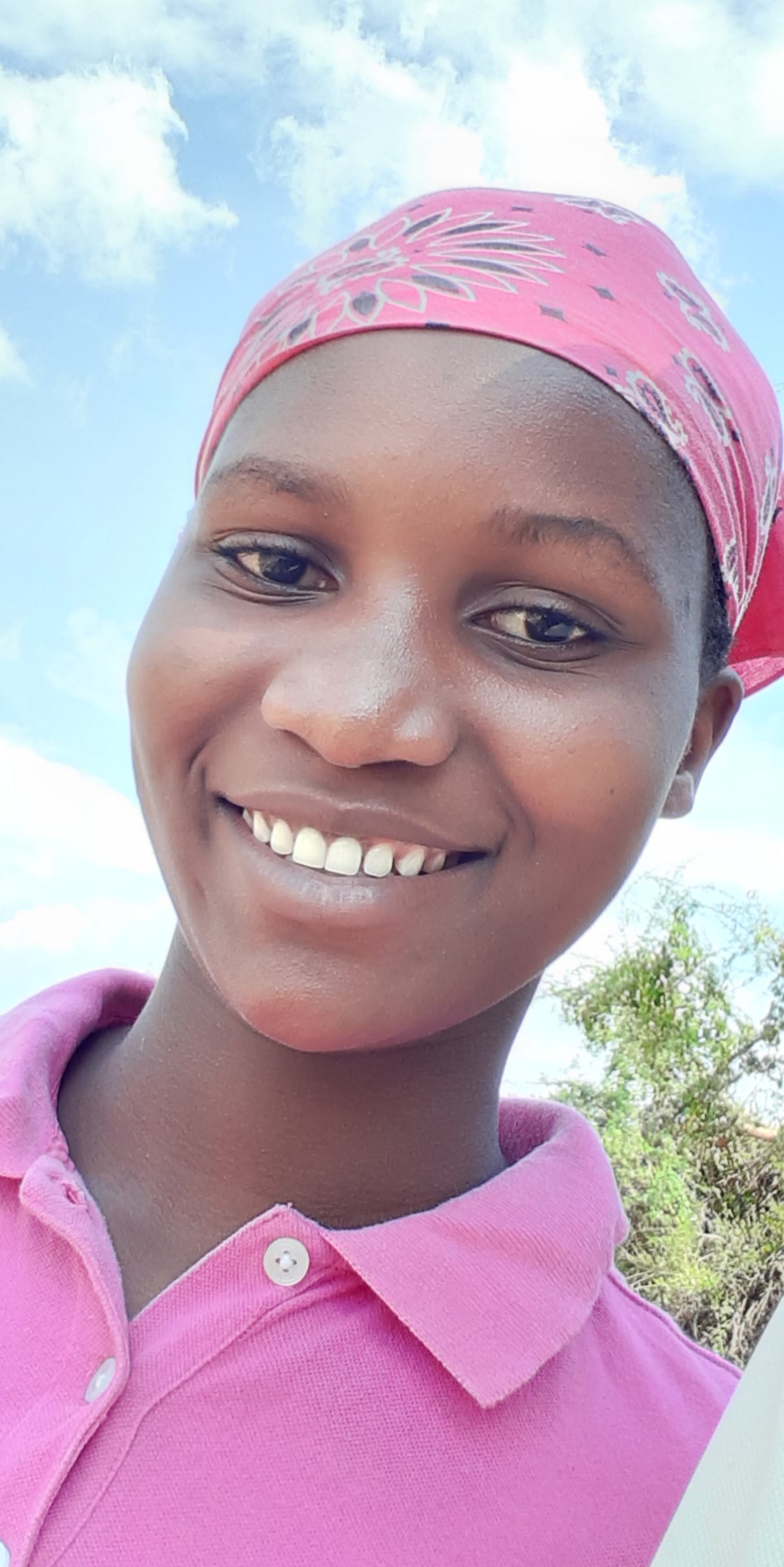 I have occasionally displayed before and after photos of some of the children, but I do not like to do that.  I would rather celebrate who they are becoming than the awful circumstances of their past.  Because our kids look so good, visitors often ask things like “are you sure these children are vulnerable?”  We get so used to seeing how well the kids are doing everyday that even we forget how far they have come.

Sometimes there are striking reminders of just how amazing our results are. One example of this came from Judy’s husband, Vin.  They were married in November and Vin had been around the kids for about a year and knows them all quite well.  One day we visited the home from where two of our little ones come.  It is a shack with broken cement floors, almost no furniture, no furniture at all for food preparation or storage, no food, and rags in some corners as the only evidence of bedding.  Of course there is no running water, no indoor plumbing, and no electricity.  Judy and I had been there before, but Vin was taking all this in for the first time.  That night at dinner, Judy was telling us about another place where she found two of our girls.  Their mother had died, and their father had recently been killed by an uncle using a machete, in front of some of the kids.  The two oldest kids, around age 20, were trying to support the family of seven working menial jobs that paid maybe $2 a day.  Judy related that when she met those children and heard this story, she had to leave for a while and cry and compose herself, and then went back to sort out the situation.  She brought in two of the girls who are now absolutely thriving and delightful, and the source of tremendous joy in this HH family.  As Judy concluded this story, Vin had his head on the table in his folded arms, distraught.  He later explained that seeing what he had seen that day, and hearing those details, was overwhelming.  He said he had never seen such abject poverty and living conditions.  Vin has lived in that area his entire life.  Judy said simply: “Welcome to our world.”  The fact that, knowing the kids well as they appear now, Vin could not imagine the circumstances in which we found them, speaks volumes about their progress.

Two other sets of visitors also provided gratifying insight.  A few days before Christmas, we were approached by a Kenyan couple in their late forties or early fifties and their adult son.  They have a family homestead literally a stone’s throw from HH, but they have lived in England for the past 15 years.  They were visiting for the holidays and they were hoping for a special family experience on Christmas.

They asked if they could bring some food and treats and spend Christmas day with us.  They had a sheep delivered, which found its way onto the grill along with some goat meet.  We had a major picnic in the HH yard for five or six hours.  At the end of the day, they all spoke encouraging words to the kids.  They went on and on talking to us, saying these are the best kids they have ever seen.  They wanted a special family experience, and they got it.  The following week, they invited all of us to their house for a fun afternoon. 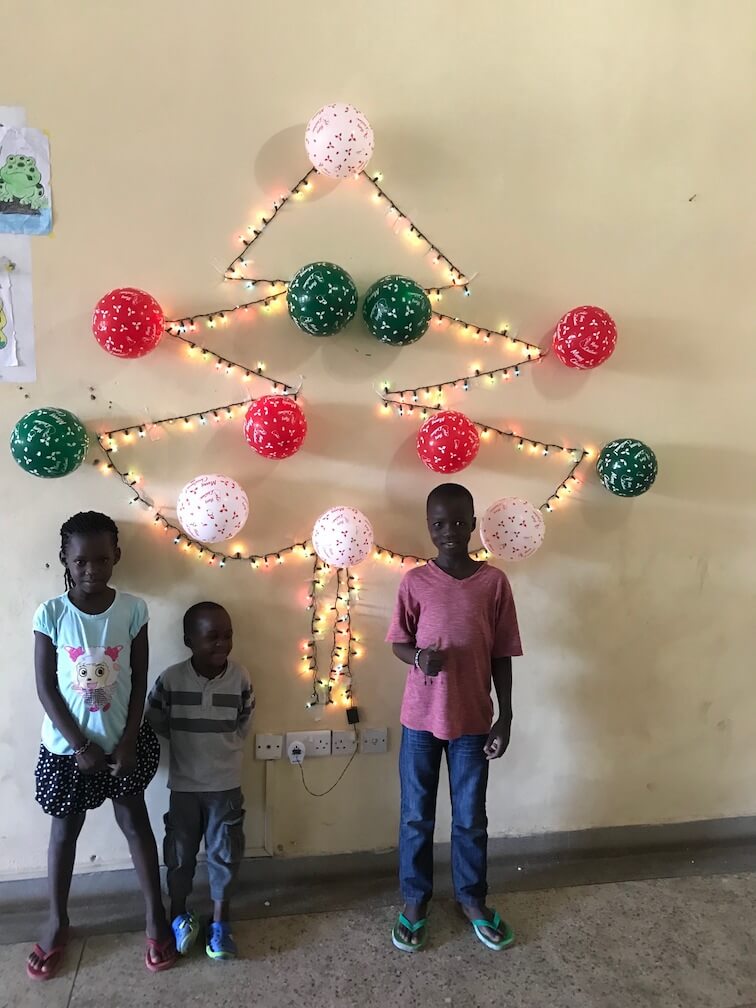 At Judy’s wedding, a young woman college student working with the photography crew introduced herself, saying she heard we have a children’s home and wondered if she could come visit.  She and her roommate visited for a few hours on a Saturday afternoon and joined us for a walk to the river.  We invited them to come back and stay overnight, which they did, and again they joined us on our walk to the river.  On these walks, they were just taking it all in and snapping some pictures.  The following Sunday morning, at our in-house service, the young woman got up and spoke to the kids.  The essence of her message was you don’t know how lucky you are because in this house you have love.  She said she had spent some of her youth in children’s homes and they never had love.  She said she was denied that.  She got an overwhelming sense of the love in our house and immediately felt like she was part of the family.  As one example of what sets HH apart, she said in disbelief: “Everybody here is equal.  The adults eat the same food and stay in the same building as the children.”  She explained that in children’s homes she knew of, the kids ate rice and beans or starch and greens, while the adults ate chicken and beef.  Judy and I were floored because we would never dream of not feeding the kids good food and a bit overwhelmed that this observer picked up so quickly on the love that we have instilled in HH.

There is also much opportunity to find broader meaning in what we do at Humanity Home.

At the house we visited that I described above, there was an older brother, aged 14.  This house is near Judy’s family home and she has known this boy for several years and has paid his school fees and expenses from her own pocket, even when she earned very little.  Because of the circumstances at the home, and the fact that this boy was obviously severely undernourished, Judy decided that she needed to send him to boarding school. This would give him three meals a day and an environment conducive to learning.  She enrolled him in a boarding school to which she was introduced by a family member.  We took the boy to Kisumu to buy him the laundry list of supplies necessary to enroll in boarding school.  He had never been to a city before, and his eyes were the size of dinner plates.  When we went to a supermarket, Judy had to explain to him that you go inside the store and select your items, and then pay for them on the way out.  He had only ever been to village kiosks where the storekeeper hands the items out through a barred window.   When she took him to the shoe store, there stood this wonderful, strong woman next to this rail-thin, emaciated boy, whose life was transforming at that very moment.  In the image that stays in my mind today, Judy is twenty feet tall.  I was overwhelmed and had to step outside and compose myself.  Later, it occurred to me that transforming kids’ lives is what we do every single day at HH.

Reflecting on that experience over the weekend, Judy delivered a Sunday sermon that left me in awe.  She told the kids that sometimes in people’s lives it seems like there is no hope and then a miracle occurs, maybe all at once, that completely changes their life.  She said that shortly before she came to HH, she was working in her brother’s business in Nairobi thinking about all the things she wanted to acquire for herself.  Then she and other church members helped a terminally ill man achieve some security for his son, and she was touched by the man’s gratitude.  She explained that she realized that she had been looking at the bottle as half empty, wanting to fill it with material things.  Instead, she said, the bottle was half full of all the many things that she could do to help others and make the world a better place.  She told us that every one of us can be that miracle for someone else.